“There was this brother at my church who usually wears a shirt with the inscription ‘Se o jasi?’. I would often ask him for the meaning of this ‘Se o jasi?’, telling him constantly that he keeps wearing this shirt everywhere…” 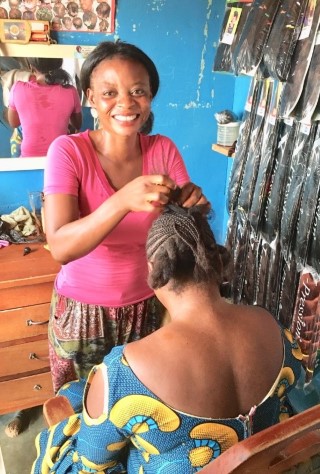 Muyiwa Oladeesu makes a customer’s hair in her salon

She recalls, “There was this day he came to my shop and I asked why he wears this shirt always and everywhere he goes. I asked him ‘Se o jasi’, bawo?’(‘Se o jasi, how); by the way, this day was not a campaign day when he and his colleagues wearing the same shirt were working, so he had a lot of time to explain to me”.

Muyiwa had always believed that using a family planning method meant an end to one’s ability to bear children. But the conversation with the GIT mobilizer changed her mind and she decided to take up a method.

“When I made the decision to take up a method, I went for implant. I was tested at the hospital, where I presented the referral card I had been issued. I was told about the different FP methods after which I was given the opportunity to pick a method I was most comfortable with”

Muyiwa shares that she has not experienced any side effects. “I am aware that some people complain about irregular flow during their menstrual period ….but unlike these people, I have had absolutely no complaints. I was and am perfectly fine…..A lady once came to ask me ‘‘why am I having some side effects and you are not?’’ and I referred her to the hospital to have herself checked”

Muyiwa is now a strong advocate for family planning in the community, disclosing that she has shared her experience of using a family planning method with others and followed up six other people who went on to take up a method.

Muyiwa excitedly shares that after she took up the family planning method, she is at peace and has no fears of unwanted pregnancies. She is also healthy, her child started schooling and she is able to focus on her job properly ‘‘Right now, my child has gone to school, I am at my shop… I am able to attend to my customers properly, my attention is not divided…’’. A happy Muyiwa beams and shares “before now, I was quite slim but now, I am gaining some weight and that’s because I do not have to worry any more… I look good and even those around me ask ‘‘what’s the secret of your beauty? …not knowing that family planning is the secret of that beauty’’.

PrevPreviousYou Deserve to Stay
NextEnforce laws against rape, violence against the girl childNext